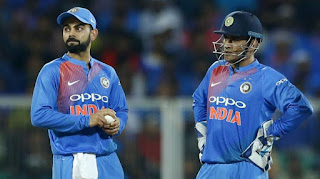 India ends South Africa's 17-match winning streak at home. This is also India's first ODI win in Durban.
With Virat Kohli carrying India to the finishing line and Dhoni finishing it in style, this is the kind of match
that every true blue Indian fan dreams of.

First things first. Lets see how the loyal fans on our Fantain Fantasy Sports performed. Naveen won a
whopping 1000 rupees, earning 495.5 points. Almost 30 points over second place Akshat Patel,
Naveen won by adding the following lineup to his dream team - Faf du Plessis (Captain), Virat Kohli
(Vice Captain), Chris Morris, Shikhar Dhawan, Quinton de Kock, B Kumar, Jasprit Bumrah, Morne
Morkel, Imran Tahir, Hashim Amla and Kedar Jadhav.
Like I said in my previous blog, the captain and the vice captain can make all the difference to the rank
in the lineup. Akshat Patel, who won 500 big bucks, had Ajinkya Rahane in the team. He had made
Kohli as the captain.

Coming back to the field, the Indian team was indeed quite impressive. That is putting it mildly
considering that most were pleasantly surprised. Let me say it this way. A defeat would not have really
upset many. This is South Africa Pitch conditions that we are talking about. And we are playing against
the home team. And South Africa has won 17 matches on the trot at home. This victory is quite an
achievement for the men in blue. While it might have looked like an easy win, it was worked for and
well deserved.

Virat Kohli, man of match, for his match winning century, said “ I haven't scored a ODI hundred in
South Africa, so this is quite special. Thus, the celebration.” Too bad he had to walk back to the
pavillion with just 8 runs left to score on the board. He would have loved to stay until the end.
Rahane’s 79 helped support the young skipper through the journey.

India have played like Kings in Kingsmead, blowing South Africa away. Will more of this follow in the
second ODI? Coming up on 4th Feb, keep an eye on who you want on the Fantain Fantasy App. You
will by now have an idea on whom to bank on. Keep your data at your fingertips and be the champ on
our app.

Click here to play. Be smart and win big.