By IBS February 23, 2018
With the first match between defending champions and newbies turning out to be a thriller, the second and third match today could be just as exciting. 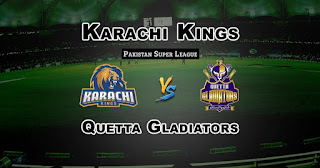 Many of the faces at PSL are new faces. When we play the matches on the Fantain Fantasy app, we are more than likely to be stumped because of this. One way to decide if you want the player on the app is if they have played an international match and have made a mark. For example, many of them have played recently at the big bash and at the tri-series between England, Australia, and New Zealand. For example Rashid Khan, Mahmudullah. Players such as Jason Roy, Kevin Pietersen, Babar Azam are familiar names. They have a reputation.

As the tournament progresses, you can see the points they have scored on the Fantain Fantasy App to see how their form is and if they are consistent.

For now, let’s see the key players in this match. There are talented players on both sides. A few popular players too.

Karachi Kings.
New Captain Imad Wasim would be full of ideas for a good positive start. Veteran Shahid Afridi is on the side of the Kings. He is a T20 specialist the team is lucky to have. A few good overseas players boost the team. Eoin Morgan. Ravi Bopara. Colin Ingram. Once Eoin Morgan becomes available for the PSL League, make sure to include him in your lineup. For now, he is playing for his country.
Babar Azam could give the team the much-needed acceleration.

Quetta Gladiators
This team has performed exceedingly well in the first two seasons of PSL. Good enough to make it to the finals but not enough. They settled for the runner-up trophy both times. They will want to make sure they take that extra effort to get the PSL championship trophy this year. Will they be lucky?

What do you think?
Indu