By IBS February 12, 2018
Australia played England on 3rd Feb and won by seven wickets, thanks to DLS. This is NZ’s second match and they meet England on 13th Feb. When NZ played against Australia, NZ hit 117 in 20 overs. The batting displayed by the Kiwis can be barely called average. Apart from Colin’s 38, the rest were just there. The bowling wasn’t much either. Trent Boult took two wickets, and Tim Southee, one.

Australia, on top of the table with three wins from three matches, enters the finals in a no muss no fuss kind of way. England and NZ have to claw their way back in seeing as they have no points on the board. And seeing as a certain Mr.Duckworth and a Mr.Lewis have already made their presence felt in this tournament, the run rate will make a difference.
Australia has pulled out in-form players from the Big Bash tournament and managed to find the right combination for the T20 format. With legends such as Mark Waugh and Ricky Ponting playing crucial roles, the team does have every chance of climbing up the ICC 20 rankings.

After dominating the One-Day International series in Australia, England now find themselves at the receiving end. England was bullied early by Australia's pace duo of Kane Richardson and Billy Stanlake to be left wobbling at 34 for 3 before they made a brief recovery. Buttler played a key role in England posting 137 for 7 in the allotted 20 overs where the stand-in captain scored 46 off 49.

They've now lost both Twenty20 Internationals to the hosts, going down in the second game of the tri-series by seven wickets. Jos Buttler, however, felt England will bounce back as the series moves to New Zealand for the second leg.

This match is expected to be a cracker of a match. Both teams look forward to getting their first win and moving up the table. Australia is not likely to change their lineup but England and New Zealand may rethink their strategies. 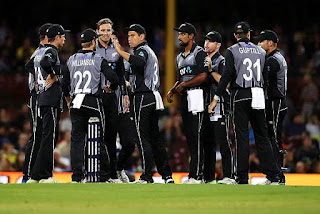 What do you think?
Indu
P.S. Please note that the above-expressed opinions are purely the Editor’s. We do not take
responsibility, nor can we guarantee the performance of the players. All the best !!!

By IBS July 06, 2017
First Match - Abandoned Second Match - India Beat West Indies by 105 runs. Third Match - India Beat West Indies by 93 runs. Fourth Match - Hmm… I don’t really want to talk about it.
Oh well.. Here goes. It was a rather embarrassing defeat. The series looked very much in the kitty when India had to chase 190 runs. The faithful Indian Fans probably even started celebrating. Even though the first three wickets fell rather early, Rahane stuck in there and hit 60 runs to pave what looked like a really short road to victory. And then came Dhoni. No one would have even considered the chance of a defeat. Not even a pessimist.
Time moved slowly after that. Or at least Dhoni did. He batted and batted and batted. Remember that time Sunny Gavaskar scored a 174-ball 36 runs? It was 1975 all over again. Dhoni’s innings were just as excruciatingly painful. It would have been worth it had India won of course. India fell short of the target and West Indies won by 11 runs. They were probably surprised t…
2 comments
Read more

Women - Object of Respect, not Objectification

By IBS June 22, 2017
I had to visit the neurologist the other day. I call up the hospital and find out if one would be on call in the evening and had my appointment booked. Fifteen minutes before the scheduled appointment, I reach the receptionist to confirm the room. She goes, “ The lady neurologist will see you in room number 10”. I was stumped. What was the message she was trying to convey? Neurologist is in? She’s a lady? Do I want to see a lady neurologist?


It got me wondering. Does being a lady make her any less of a doctor? Why can’t the receptionist just say “ The neurologist is in?” And then I wondered .. does anyone ever say “lady receptionist”? No. Then why this tag for a doctor? Women today are just being designated to posts where they can look pretty. Looking pretty seems more important than doing a good job. There are actresses who have confessed that they were told by the director to just look pretty and needn’t worry about acting. It is a pretty sad state of affairs when women are being loo…
3 comments
Read more