By IBS January 30, 2018
India completed the test series by winning the last and final match. Didn’t win the series yes, but made sure that the morale was boosted and that seemed like the takeaway for the men in blue. 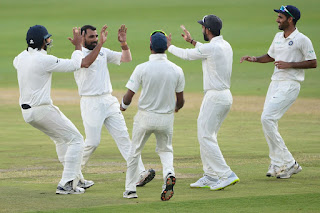 The sensational fast bowling brought India to an excellent win. Taking 60 wickets in three matches is indeed more than just a record. It is something that truly lifts the spirits of the boys. Ishant Sharma and Jasprit Bumrah helped cause the dramatic collapse. "This is one of our sweetest wins," skipper Virat Kohli said. "This day will be remembered for a long time for us as a team."
The best part is that India now ranks number one in the ICC test ranking. We have overtaken South Africa. That is the icing on the cake. India is second on the ODI rankings too, with SA on top. Will we see that change too? Time will tell. The Virat Kohli led India can top the ODI table if they win the series by 4-2 or better, while to retain the top spot, South Africa will just have to draw the series. However, India will slip to third place if South Africa win five out of the six planned ODI.

With the ODI series starting on first Feb, the match could literally be in the hands of these fast bowlers; considering the pitch conditions. When picking a lineup for the first ODI, keep in the mind the pitch. Captain and Vice Captain too.

The match takes place at Kingsmead, Durban. The pitch has quite a green tinge to it. This ground has its highs and lows. It has seen a magnificent 658 in 2003. And also 66 all out in 1996. The 66 was by India. But ok. South African pitches are tricky. Tricky enough to cause the umpires to halt play. So the team’s composition

Let’s take a look at what could be a good lineup. Fast bowlers, fast bowlers and fast bowlers. Batsmen are likely to have a really hard time. Considering the performance of the Indians in the test series, we can predict how they might play in the upcoming ODI matches.

Shikhar Dhawan was barely average. So was KL Rahul.  Rohit Sharma needs to scale up big time. Parthiv Patel lacks confidence and must buck up big time. Murali Vijay was just about alright. While Kohli stood out well in the badly performing batsmen list, Pujara managed to deliver to some extent.

The ones that stood out were the bowlers - Bhuvneshwar Kumar, R Ashwin, Mohammed Shami, Jasprit Bumrah and Ishant Sharma. This should give you an idea about how the proportion in your lineup should look like.

What do you think?
Indu
P.S. Please note that the above-expressed opinions are purely the Editor’s. We do not take


responsibility, nor can we guarantee the performance of the players. All the best !!!