By IBS November 21, 2017
If anything comes close to the eccentric hype that takes place during India-Pakistan series, it is the Ashes. That is not the only similarity. This tournament is just as personal. The phrase ‘let’s go to the mattresses’ is taken very seriously during this tournament. That is seen if you take a look at how the name came about in the very first place.

THE NAME
The first match between the two teams - England and Australia - took place in Melbourne, Australia in 1877. The legend of the Ashes began in 1882, after the ninth test. Australia toured England. It was a brilliant match. A match that Australia won on the English Soil. A match they almost lost. Dead silence took over the stadium. They could not believe their team had just lost to a colony on home soil.

On 2 September a celebrated mock obituary, written by Reginald Shirley Brooks, appeared in The Sporting Times. It read:
In Affectionate Remembrance of ENGLISH CRICKET, which died at the Oval on 29 August 1882,
Deeply lamented by a large circle of sorrowing friends and acquaintances
R.I.P.
N.B.—The body will be cremated and the
ashes taken to Australia. 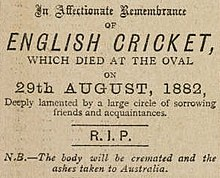 Ivo Bligh promised to set things right and bring the Ashes back home. The story goes as such. When England next toured Australia those ashes became real - a pair of bails were burned and the ashes put into the now famous urn.
In August 1926 Ivo Bligh (now Lord Darnley) displayed the Ashes urn at the Morning Post Decorative Art Exhibition held in the Central Hall, Westminster. He made the following statement about how he was given the urn.
When in the autumn the English Eleven went to Australia it was said that they had come to Australia to "fetch" the ashes. England won two out of the three matches played against Murdoch's Australian Eleven, and after the third match some Melbourne ladies put some ashes into a small urn and gave them to me as captain of the English Eleven.
The name was never mentioned again till 1899. The name then stuck. Today, the series is one of the biggest and the longest rivalry not just in cricket but amidst all sports. If you ever wondered why such a sombre meaning for a cricket tournament, here is why.

This year is rather special. The one that wins leads.