By IBS July 22, 2017
Based on the stupendously successful Indian Premier League is the Tamil Nadu Premier League. This Indian T20 cricket league has been established by the Tamil Nadu State Cricket Association to bring out more and more Natarajans and Washingtons who otherwise do not get a chance to showcase their skill and talent in the world of Cricket.
The inaugural edition of the TNPL took place in 2016 and received unexpected and unprecedented success and love. There was a brilliant batch of young men who came forward and made an event out of the first season of TNPL.

The purpose of every organization is to make it bigger and better. TNPL is no exception. At the inaugural TNPL 2016, there were the traditional two semifinals and one final. This year will see a format similar to IPL. The finalists are decided by two qualifiers along with one eliminator. This format has proven to be more exciting.
The timings have also been changed. Matches now start at 3:30 and 7:30 respectively.
The grand opening of TNPL season two begins with a star-studded six-hitting contest. This tournament is going to be all about the game. No frills no fancies. Just pure cricket. That’s the way we like it. The opening day is going to showcase hard hitting with full powered swings.

In the history of cricket, we have truly seen some tremendous performances. Some of the best players are going to make their presence felt here at TNPL season 2. They include our very own Mahendra Singh Dhoni along with one of the most destructive openers, Matthew Hayden. The shots are going to be brutal. They are going to shot out of the park. And that is what the audience wants to see.

TNPL season two is indeed going to start with a bang.

All eight teams that played in the first edition are here for their second attempt at the cup. Tuti Patriots will be keen on retaining the title. While it is a pity that outstation players were not able to get clearance to play in the TNPL 2017, there is most definitely no shortage of stars.

Let’s take a look at the teams. 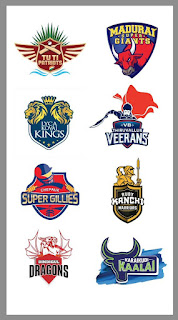 A little bit of trivia. The name of this team along with the logo came from a fan contest. The owner, who truly understands how fans and loyalty work, requested many fans of the game to come up with a befitting name and logo. The response was phenomenal. And the result was loved by all.
This team was the Runner Up of season one. They were very close to snatching the title from Tuti Patriots. If anyone is confident of winning the cup, it is the Chepauk Super Gillies Team. They had five wins from seven matches, while the team that won the cup won only four out of seven. Ain’t that something?

With a very catchy anthem to keep not just the players but the fans on their toes as well, the Lyca Kovai Kings are here to conquer the 2017 trophy. Their performance in the first season was not disappointing. Far from it. They do have what it takes to work on their journey until the end.
With former South African All-Rounder, Lance Klusener retained as the team’s coach, they are amply strengthened in all departments. Klusener could make any opponent shiver. The players are truly blessed to have him as their coach and can learn a lot from this legend.
They did reach the last four in season one. No reason why they cannot do better this year.

Representing the City of Temples, The Madurai Super Giants are here with their scream “ “Aattaikku Readya?”’ asking you if you are game. They mean business and they show it loud and clear. Yes, they finished last on the table in season one. They do want to more than up for their performance and are out with the passion and enthusiasm of a Madurai Veeran.
The raging bull on their logo depicts their desire to make a difference this season. They are truly raring to go. With coach Michael Beavan to their team, what more do they need?

“Ithu Neruppuda”. The team refers to not just the fire that is emitted by the dragon but the passion and fury that they have for the game.
With five wins out of seven matches and a high net run rate of +0.6980, the Dindigul Dragons were on fire during the first season of TNPL in 2016. The name stands for power and might of the team. With the dragon image as their logo and the catchy tagline attached, this team is as aggressive as the mythical creature that represents them.

This team missed the semi final literally by a whisker. The VB Thiruvallur Veerans missed the berth because of an inferior run rate. They have what it takes to make it big.
Married to an Indian who belongs to Chennai, Muttiah Muralitharan, fondly known as Chennai’s son in law is the coach for this team. He is all set to mentor the VB Thiruvallur Veerans and set them on the track to the cup.
Groomed by the legendary VB Chandrasekhar; the team is lucky to associate themselves with the man that also took Chennai Super Kings under his wings. VTV, as the team calls themselves, had a decent finish in season one and hope to advance to the next level this year.

Representing the capital of Chettinad, the Karaikudi Kaalai Team have a raging bull as their team logo. The traditional team song along with the green and blue jersey make the team stand out in their own way. With Robin Singh as their head coach, they have a very good chance of making it big this season.
The raging bull on the logo was inspired by the popular bull-fighting sports Jallikattu. The team compares itself to what this logo depicts - reliable, confident and able to take on any situation without backing down. The team inspires to rage towards the cup without letting defeat get to them.

This team has done everything they can including changing the name to bring about a better season in 2017. They went by the name Ruby Kanchi Warriors in Season One. Changing names and colours of the logo is now not unusual. This team believes that the right mindset is the key to their success.
They go into the second season after finishing second to last in the inaugural edition of the TNPL. They have a lot of hope in their performance this year. Representing the city of Trichy, this team is complete with domestic players only.