By IBS June 22, 2017
What would make Sri Lanka a threat to the other teams in the women’s world cup? The phenomenal increase in their hitting ability. Their coach, Hemantha Devapriya believes so. And the other teams must sit up to take notice. When the opponent is made to chase a high target, their morale also takes a hit. This is an advantage for Sri Lanka. The coach has helped the girls use the pace of the ball to increase the shot-range. A smart move to use their own strength against them, isn’t it?

This squad is one of their most experienced one till date, out of which nine have played the world cup in 2013. 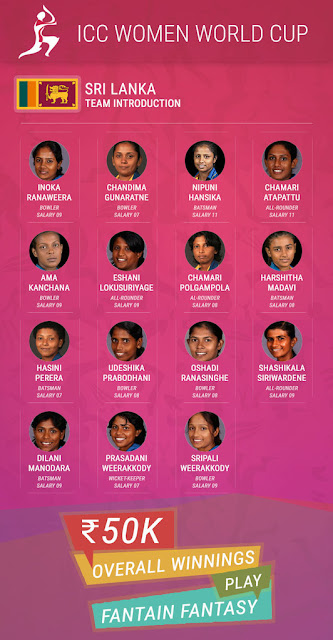 Players to look out for:

Former Captain Shashikala Siriwardene returns to the team after an injury. This has increased the morale of the team on the whole. The experience that she brings to the team along with the fact that she is an allrounder is a big boost.

Opening batter Chamari Athapaththu can make all the difference if she clicks well. She was the top scorer at the WC Qualifiers with 155 runs. She is also the highest run scorer of her team. She will always be known as the first woman to score a one- day international century.

Sri Lanka’s traditional strength is in their spinner - Ama Kanchana. This looks like an asset of the Indian Subcontinent. The question is, will it work in the given conditions. Time will tell.

The team has worked very hard and have attended various sessions to improve their overall outlook. The rest depends on their performance when they are out in the middle.